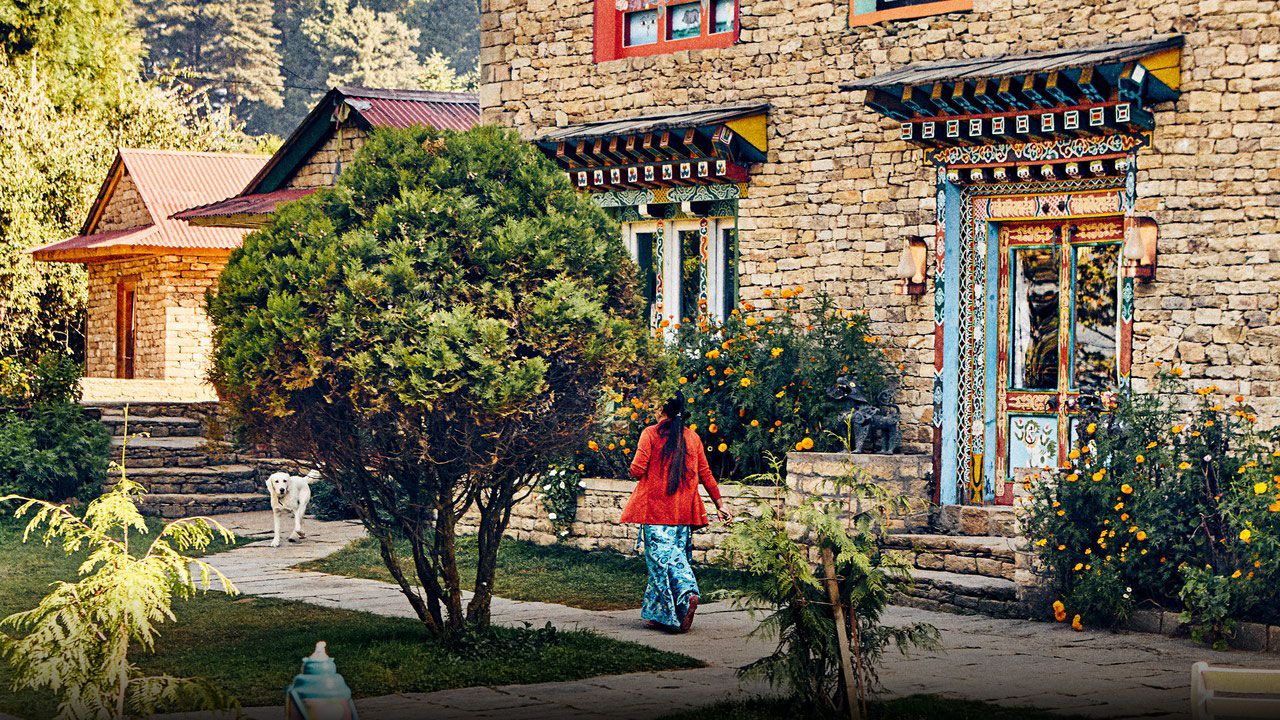 On Your Next Trip to
Nepal, Rent the House Sir
Edmund Hillary Loved

On Your Next Trip to
Nepal, Rent the House Sir
Edmund Hillary Loved

THE SO-CALLED HAPPY HOUSE IS WHERE THE
EVEREST CONQUEROR USED TO STAY ON HIS RETURN
VISITS TO THE HIMALAYAS. NOW RUN BY THE SHERPA
FAMILY WHO BUILT IT, THE HOUSE CAN BE TAKEN
OVER FOR ADVENTURES OF YOUR OWN.

By SOPHY ROBERTS
December 20, 2018
It is my favorite writing desk in the world: a simple Italian bureau in a candlelit corner of the Happy House, in the Solukhumbu region of northeastern Nepal. There’s the spit and crackle in the fireplace, the smell of burning juniper, and the warm spices of dal bhat being stirred on the kitchen stove. I love the deep leather chairs that hold the shape of the last person who sat here reading, and the low-slung pendant lamps, which cast warm pools of light over games of cards. The gambling table is from Italy. The bronze statue of Kali is from Lalitpur, the ancient capital of arts in the Kathmandu Valley, all 175 pounds of it carried on the backs of men in the 1970s before the road arrived. The ghosts of the home’s past reappear in the flicker of a butter lamp beside the family’s Buddhist altar, the glow revealing a black-and-white photograph of the Happy House in snow. Still standing after decades of Himalayan earthquakes, this important piece of history is as fragile as the shifting Caravaggio light. 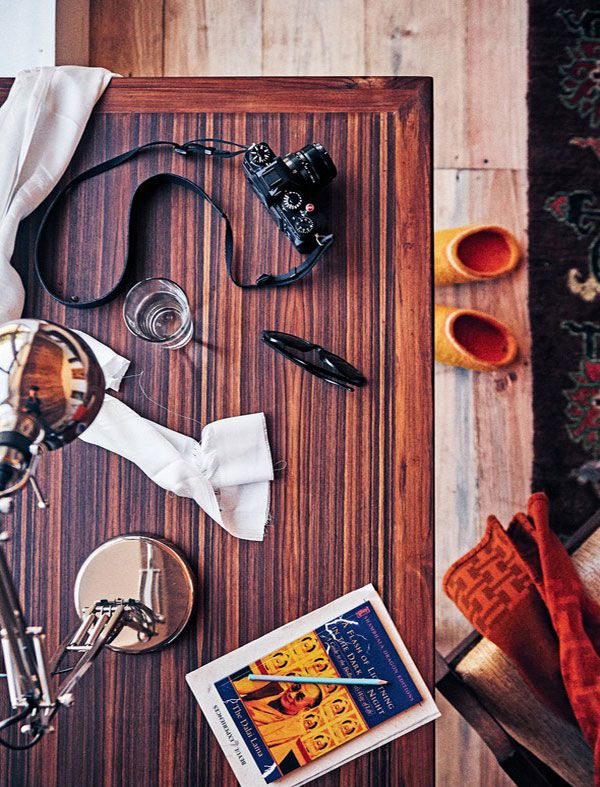 In the main bedroom at the house.
Oliver Pilcher 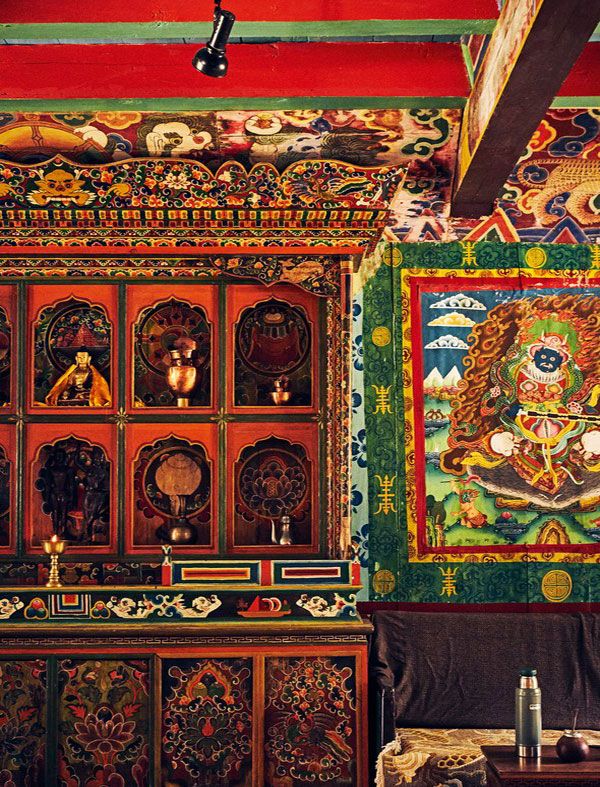 This journey begins with the helicopter flight out of Kathmandu. The mountains rise in narrow wedges; pine trees cling to the ridgelines, their contours drawn by lime-green terraces and crops cut into bobble-headed bushels straight out of Dr. Seuss. Within an hour—in air so clean you can see all the way to Everest—I’m in Phaplu, the cradle of Sherpa culture. Turn left from the village airstrip and it’s a three-day hike to Lukla, the gateway for Everest climbs. Turn right, and it’s a five-minute walk to the Happy House.

Up a flight of stone steps, beneath fluttering prayer flags, the house stands on a wide terrace flanked by moody pines. Inside, the walls of the main room are painted in the madder reds of a monk’s robes. In the shadows, a dragon with a polka-dot tail lashes at the rafters, while blue-faced Tibetan demons grimace, their goggle-eyes yellowed by smoke. These frescoes were begun in 1974 by Khapa Rinzi, a Sherpa master of the monastic art of thangka painting.

In Buddhist culture, both creating and looking at a thangka are acts of meditation, which gets to the heart of how it feels to sleep here—a private home in the Himalayas, now renovated into a house to rent. Soon after it was finished, Sir Edmund Hillary stayed here, and continued to do so until 2001, when he stopped coming to the Himalayas (he died in New Zealand in 2008). His affection for Phaplu gave the Happy House its name. Hillary came because of a hospital he founded in 1975 to serve the remote valleys of the Solukhumbu, still just five minutes down the road. 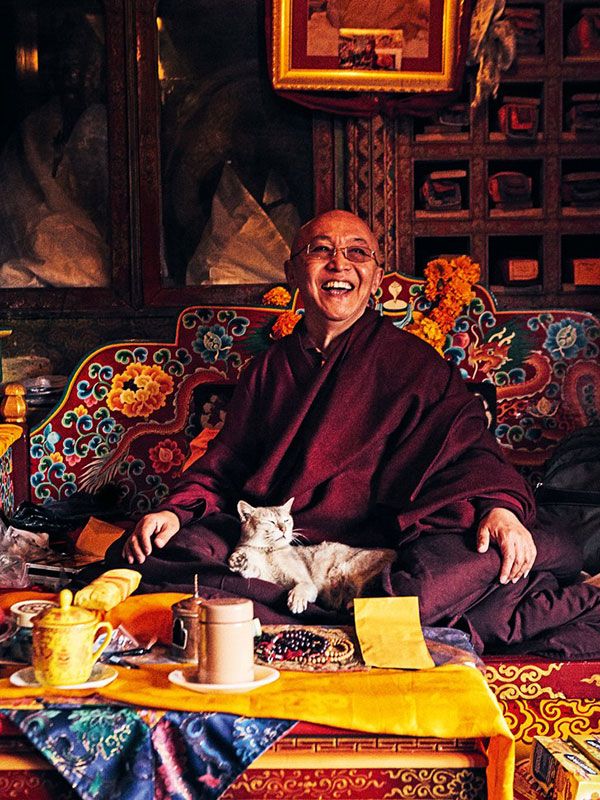 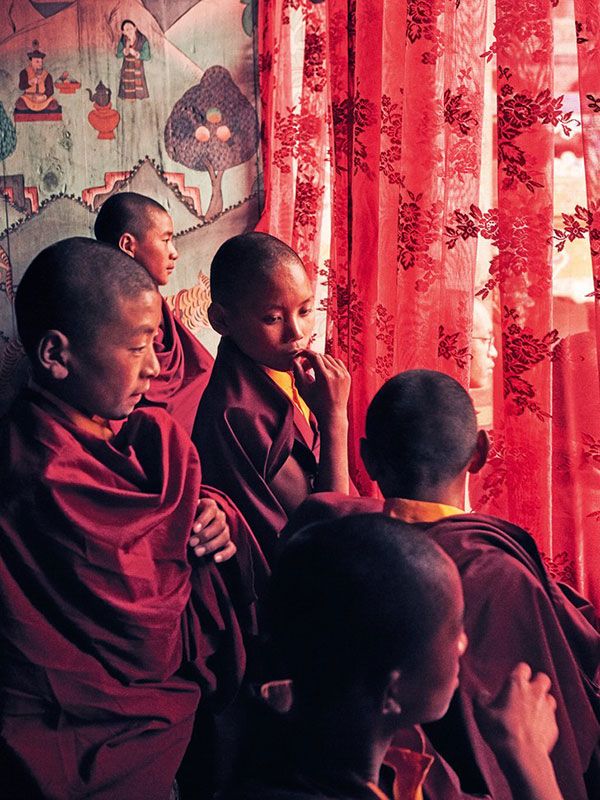 Yet it wasn’t Hillary who built the home, but another Everest expeditionary: a debonair, mustached Italian named Count Guido Monzino. From 1955 to 1973, Monzino adventured from Senegal to the North Pole, from the Tibesti plateau in Chad to East Africa’s Mountains of the Moon. In 1973, he led the first Italian expedition to climb Mount Everest in what was heralded as the most extravagant attempt of all time: 6,000 porters, whose luggage included fine wines, cigars, silver cutlery, and an English leather sofa, which now rests beside the fire where I am sitting.

Also among the count’s climbing party was Rinzi Pasang Lama—the patriarch of a high-profile Sherpa family; he was the great-great-grandson of the founder of Chiwong Monastery, which clings to a cliff at the valley’s back. When he was 18, R.P., as he’s known, helped build the Happy House on his family land under the guidance of Monzino, who paid for the construction. In the house’s early days, the odd mountaineer stopped by this Hostellerie des Sherpas. “Monzino always brought interesting people—he was a generous, elegant man,” recalls R.P., now 63. On the count’s death, in 1988, R.P.’s family operated it as a modest guesthouse, only to see this eccentric legacy be almost lost forever due to Nepal’s political tumult.

In 1996, a violent Communist insurgency ravaged the country; over the next 10 years, some 17,000 people were killed, with civil war finally putting an end to the incumbent government and 240 years of the troubled Nepali monarchy. On a dark winter’s night in November 2001, R.P. hid on the grounds of the Happy House while 35 government officials were shot dead in a rampage that would be the biggest battle of the Nepalese civil war. Twelve days later, R.P. left Nepal with his family, taking $10,000 and a single suitcase from Phaplu. They were given political asylum in the U.S. and settled in Queens, New York, where they opened a grocery. 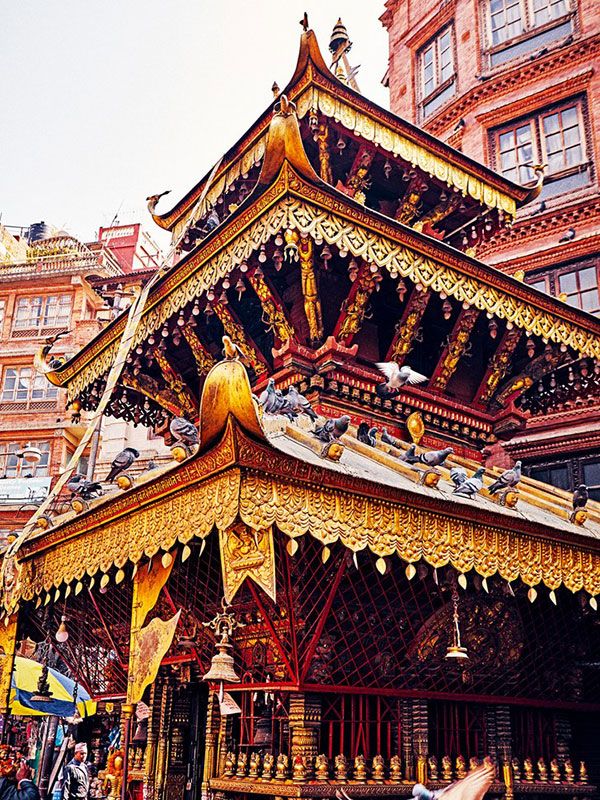 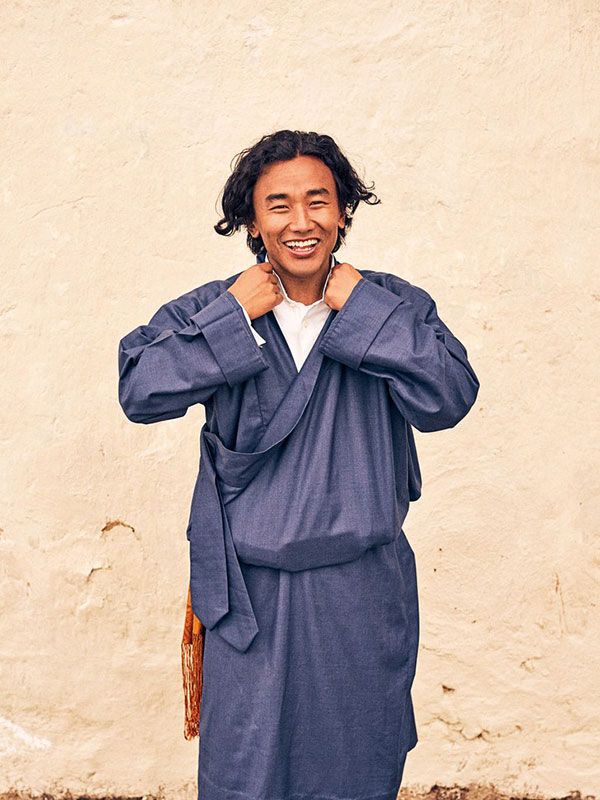 The Happy House could have been lost forever in that turbulence. Instead, R.P. handed it over to a German filmmaker, Christopher Giercke, who had been coming to the valley since the 1980s to make a movie, Lord of the Dance: Destroyer of Illusion. Giercke kept the spirit of the house intact, visiting it often with friends—including my family—until the summer of 2017, when R.P. and his son, Ang Tshering Lama, decided to invest in the home’s renovation. This fall, it opened as the hub of Ang’s new travel company, Beyul Experiences. “In Buddhist texts, a beyul means a sacred space, like Shambhala,” he says. “I’ve always thought of this family home as the paradise of my early childhood.”

The Happy House can’t help but seduce, even if (or because) it doesn’t have the nickel-tapped polish of a luxury hotel. Once when I visited, the British adventurer Levison Wood was walking the Himalayas for his hit television series and ended up staying here. “A sort of salon for the mountain literati,” he described it later, “packed with history against the backdrop of the magnificent Himalaya.” On my most recent visit, the British novelist Laura Beatty was staying too. When she emerged from a two-hour healing session with Sugam, the home’s craniosacral therapist, she said, “Something just happened I can’t put into words.”

The house seems to affect everyone, even without the yoga master and his singing bowls. It’s a place to enjoy feasts of earthy mushrooms and homegrown greens served on beaten copper plates. The squash is picked from fields of frothing cosmos; the honey is harvested from bees fed on marigolds; the yak meat is bought from farmers and stirred into warming noodle broths. Heading up the staff are Mingma Sherpa—an apple-cheeked guide and cook who has worked on more than 60 expeditions to Mount Kailash—and Ang Tshering Lama, who masterminds the overnight camping treks and helicopter forays, from Everest flybys to breakfast at 13,800 feet. On our most recent visit, while the kids went mountain biking, crashing through rivers and down switchback paths, the adults attended the spectacle of Mani Rimdu, one of the oldest Tibetan-Buddhist festivals in Nepal, where the monks wear richly embellished costumes. 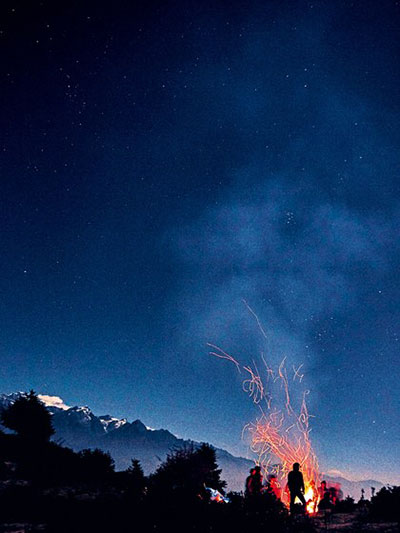 All 20 of us camped atop the ridgeline and watched dawn break as drums echoed through the valley below. When we returned after an all-day hike, we gathered in the Happy House to drink wine before retiring to beds warmed with cashmere blankets. If I worried that writing this story would bring traffic to a place that’s special because it’s little visited, my pride was soon corrected: At a private audience with the rinpoche, the abbot of the local monastery, he reminded me everything is impermanent—that objects, places, and lives don’t belong to anyone.

Our first transatlantic issue of Traveler is here! Our editors in New York and London have hand-picked all the places you need to visit next year. In the mood for a foodie trip? Make your way to Valle de Guadalupe. Craving an escape? Look no further than the Happy House in Nepal (it's where Sir Edmund Hillary used to stay). Head to the link in our bio now for a letter from our editor explaining it all, and pick up your issue on the newsstands today. 📷 @alistairtayloryoung

The front door of The Happy House in Nepal, where, up stone steps and beneath fluttering prayer flags, walls are painted the red of a monk's robes. This was once a private home in the Himalayas and the base of Everest-conquerer Sir Edmund Hillary: now it can be taken over to rent as your own. Read about it in the #GoldList2019 issue, on sale at the #linkinbio.

'Up stone steps, beneath fluttering prayer flags, the house stands on a wide green terrace flanked by moody pines,' says @sophy_roberts of The Happy House. It's here that Sir Edmund Hillary stayed on his return visits to the Himalayas – now run by the Sherpa family who built it and available to take over as your own. 📸  @oliverpilcherphotography